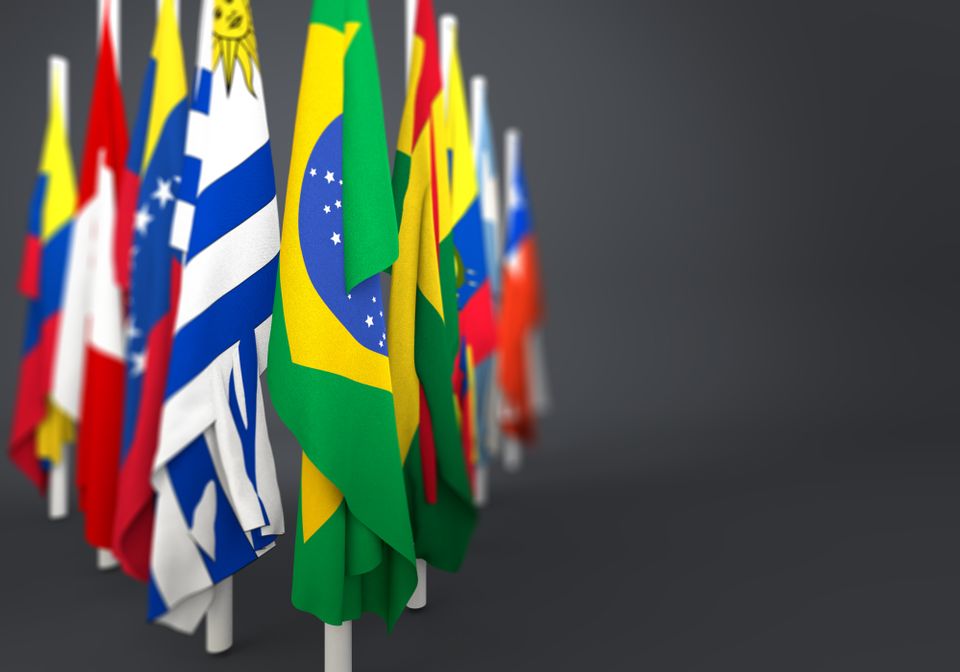 When we refer to “Hispanic” civilization, we are conflating an entire history and culture of Spanish-speaking nations, and the people native to those nations. While this term makes sense linguistically, it fails to truly commemorate the history of these nations and the growth of this civilization as a whole. “Hispanic” only references the language that ties together my people as it refers to the Latin word “Hispania,” which means Spanish. Those of us who are a part of  “Hispanic” civilization are fascinating because of the fact that we cannot fall under one term; we’re undefinable when it comes to boiling it down to a limited word. Over the last thousand years, we have not only shared the same language, we have also been rooted in the same historical occurrences. My own personal reluctance to use the umbrella term “Hispanic” is shocking because before learning the history, I did not find a problem with it.  However, the most compelling element of our collective past has been the fact that while those of us from twenty-one moderns nations share a unifying history that inspires the term “Hispanic,” we have concurrently evolved into diverging cultures which invalidate the term and urge us to find a new one. As a result of our complicated history and my own personal experience, I’ve found that “Latinx” better encompasses my people and the hardships we’ve endured.

Over a thousand years ago, Muslims brought the Islamic religion into the Iberian Peninsula, which was mainly Christian occupied. The Christians under Muslim rule that came to be known as Mozarabs, because of how they incorporated Arab language and culture, are the first hint of “Hispanic” civilization as a whole since they represent a mixing of culture. This mix extended into one of race and ethnicity as some Christian women ended up pro-creating with Muslim men, creating a whole new race. This new mix of people, along with the Christians who converted to Islam, musalim, and the children of these converts, mudawallan, stand out as the first true “Hispanics” to me as they embody the root of my people: mixed people with different cultures coming together to create a completely new race. Though the history proves that Christians of northern Hispania eventually gained power back, this mix of people and the creation of a new identity sprouted the beginning of such a concept for “Hispanic” civilization and left a mark on the culture forever.

Learning about how bits of Arabic have folded into Castilian Spanish also relates to how great of an impact the Muslim invasion had on the culture of the civilization. It’s interesting that Spanish words like “ojalá,” “azúcar” and “arroz” are all extremely common nowadays and refer to definitive elements of the culture, but have roots in Arabic rather than Castilian Spanish. Nearly a hundred Arabic derived words are present in Castilian Spanish today. In a geographical context, this also means that these words have roots in al-Andalus, not Hispania, which points out that the impact of the Muslim invasion has been strong enough to last beyond the occupation and extend to the current-day. Though languages often assimilate features from other languages due to historical occurrences, these instances of language hold deeper meaning as they reflect on the new culture brought about by the Mozarabs, musalims, and the mudawallan. The incorporation of Arabic culture into the Iberian Peninsula goes beyond linguistics, there was also poetry and areas of study, like astronomy, brought in.

The Spanish Inquisition may have been a dark, cruel time of religious persecution, but it still brought about cultural influence to the entirety of “Hispanic” civilization, and illustrated a different mixing of people. In 1942, The Inquisition essentially brought another mix of people into the peninsula, and into the overall history of “Hispanic” civilization with the conversos. Conversos were Jewish people who converted to Christianity and spearheaded the exodus against false converts. Though this new “mix” of people was not a result of procreating like that which emerged from the Iberian Peninsula, it still brought a different ethnicity into “Hispanic” civilization as a whole, since they had different racial and cultural backgrounds, but chose to adopt Christianity. Even today, hundreds of years after both the Inquisition and 16th century colonization, many of the twenty-one modern nations that fall under “Hispanic” civilization have a strong connection to a Christian or Catholic faith and embed it into their respective cultures. The Virgencita de Guadalupe symbol is emblazoned on jean jackets in a sequined pattern and abuelas pray with their votive candles and gold, saint engraved chains.

The period of “Hispanic” civilization history that most reflects a diverging of cultures due to a long, shared history, is that of the Revolutionary Period in the New World. This point in history not only brought about several more racial mixes into “Hispanic” civilization, it also contributed to an overwhelming cultural influence that helped create the multicultural status of today’s “Hispanic” civilization. In the Greater Antilles, Spanish colonizers mixed with Indigenous women and African American slaves, while Central and South America saw new racial ethnicities emerge from Spaniard and indigenous unions of several different tribes — all of which were either forced or free. As a result, the basis of mulatto and mestizo identities were created, which somewhat reflect the Mozarab and mduwallan identities. The criollo identity emerged around the same time from the Spaniards that procreated with other Spaniards. European settlers also added to the new creation of ethnicities as they mixed with the ethnic groups of the New World. Certainly, all of these ethnicities carried diverse cultural backgrounds in addition to their distinct ancestries. These cultural backgrounds mixed with the reality of vast regions expanded the entirety of “Hispanic” civilization to a point where all of these different parts of the New World needed independence from Spain, as they were no longer strongly connected ethnically or culturally. Thus, the Revolutionary Period was ignited in the 17th Century as a result of many other factors, but with a definite adherence to the multicultural and multi-ethnic status of Latin America.

The Revolutionary Period saw these different cultures and ethnic identities become more valid as they became nation’s states. During the 17th century, of the twenty-one modern nation states that fall under “Hispanic civilization,” twelve were officially born. As these nations became independent states with their own national identities and more ethnic identities within the states, they moved farther from Spain and its historical name of Hispania. The Revolutionary Period saw these twelve new nations only share the Spanish language with Spain, as they developed their own cultures on a whole different continent. Therefore, the “Hispanic” term feels wrong in relation to Latin America as the nations in it have formed their own nationalities and identify according to these nationalities before adhering to the broader term.

Each of these imperative chapters of history have inarguably shaped the twenty-one modern nations that speak Spanish and fall under the “Hispanic” term. Today, we can see that nearly all of the nations have felt the apparent legacy of the Iberian Peninsula as the base of the entire civilization off a mixed race of people, thus a blending of cultures. Though the Iberian Peninsula initiated this legacy, it does not mean that a name originating from its region should rightfully fit all of these nations. The identifying term should really be a combination of a word derived from Hispania and a word derived from al-Andalus to truly commemorate the origins of a culture and history that connects twenty-one modern nations. Understandably, people opposed to the strict Muslim rule – ironically, the mudawallans themselves – would have been resistant to commemorate al-Andalus or their connection to it.  Still, the term does not make technical or logical sense when the history and impact of the history is examined.

Despite a rich, shared history, these nations have grown into their own bodies of cultural and ethnic realities which is also why it is inadequate to simplify them under one term. Spain does not have a true cultural connection to Latin or Central America anymore. The only thing that merely ties them together today is history and language. This does not feel like a strong enough reason to shove all of these distinct nations under the same term. Although I understand the desire to try and attach twenty-one modern nations and identify them with one, easy word, this does not take away from the dishonesty of the label itself.

As a woman with Chilean and Ecuadorian descent, specifically as a mestiza, my view of “Hispanic” civilization and the inadequacy of the term “Hispanic” is entrenched in a Latin American perspective. My biggest problem with using “Hispanic” as a relative and unifying term is that I do not feel unified with Spain when it comes to my ethnicity. In fact, I  feel extremely separated from Spain and the historic relevance of the “Hispanic” term. I know it fits into my ancestry, but the vast culture that separates us along with a rough past of colonization stops me from feeling actually connected to them as a part of my identity.

Recently, I even had a negative encounter with Spaniards. At my retail job in NYC, I hear a lot of people speaking different languages. Whenever someone rolls Spanish off their tongue, I feel compelled to talk to them. But when a dark-haired mother and her teenage daughter came up to my register spitting my native language, I tensed up a little bit. The “th” sound of their “s” confirmed they were from Spain.  A fearless part of me told me, so what? I said hi. As we engaged in small talk, I felt them staring down at me suspiciously. Finally, the mother inquired, “where are you from?” When I told her I was from Chile — the forgotten skinny little country at the edge of South America — she stopped talking to me in Spanish. It didn’t matter that we were both wearing Philadelphia Eagles shirts, it didn’t matter that we were Americanized. The division of our ethnicities stood as clear as this Spanish mother and her silent daughter physically looked down at me.

My experience with meeting people of other Spanish-speaking nations has not been as formidable, but I definitely feel a difference talking with my Colombian friends than my Chilean relatives. My friends can hear my unique accent and make fun of my country’s wrangled Spanish. Even so, I find myself connecting more with people from Latin American. This may simply be regional, but it feels rooted in the dark history that Spain caused upon Latin America and the attitude some Spanish people continue to exude.

Personally, identifying as Latinx feels better than choosing the “Hispanic” term as it separates me from Spain, but unifies me with the once colonized nations. Latinx comes from the word “Latino” which generally refers to someone from Latin America. However, the “x” in Latinx makes the word gender-neutral and allows it to act as an inclusive label. The reason I truly identify with Latinx is because of how the “x” also represents the intersectional realities of many people, myself included. This helps with any erasure that tends to happen when Latinx people have indigenious roots. The term “Latinx” is not perfect, though. My Colombian friend, Juan Osorio, admitted “I guess Latinx is better than Hispanic. But I don’t think there’s a better word yet.”

Ultimately, it’s been eye-opening to learn the pieces of history that have remained throughout the culture: the Arabic words entwined into the Spanish language, the strong roots of a Catholic faith, and the revolutionary, resilient soul of this entire civilization. It makes more sense where my own complicated heritage and sliver of this entire history fits, and has inspired me to find an accurate way to describe my people.

Maya Georgi is a Latinx woman, journalist, poet and punk music enthusiast. You can find her at a concert for a band you’ve never heard of.