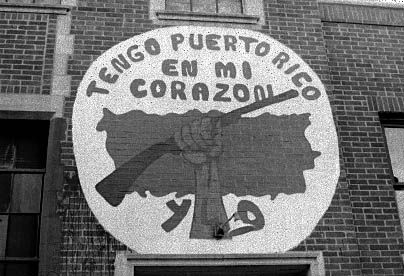 The Young Lords, a Puerto Rican political activist group, got its start in 1969 led by Jose "Cha Cha" Jimenez and ardent revolutionaries. Similar to the Black Panther Party, an armed revolutionary resistance group, the Young Lords supported and fought strongly for the rights of the people in their communities, especially in New York City. While many people see the Young Lords as being a distinctively formed LatinX resistance group, this paper will examine how the Black Panthers ideologies influenced the formation of the Young Lords as an organization and how they became revolutionary. This is due to both leaders of the groups meeting, having similar community service acts, and their almost identical ideologies in their point programs.

Puerto Rican student activists had participated in events alongside the Black Panthers since that organization's start in 1966. They joined together to fight racism and police brutality. During this time, there was also a light shed on the Afro-LatinX identity, with people like Denise Oliver-Velez, who identified as black but advocated for the rights of Puerto Ricans too. Denise Oliver-Velez who was both a Young Lord and Black Panther, was one of many who we can say today, brought awareness to the issues of colorism in many LatinX community and allowed for many Puerto Ricans to acknowledge their ancestry and to not assimilate to white America regardless of the shade of their skin. This conversation made its mark in todays society as it made a lot of people realize that race is not ethnicity.

In the essay, "Constructing Blackness in “¡Presente! The Young Lords in New York” Exhibition,” by Omar Eaton-Martínez, explains that “You have to start with that internal revolution. Some of them [Young Lords] may not have been phenotypically black but they acted as black radicals. They claimed Afro Taínos. This declaration of Afro Latinidad cut against the grain of what Puerto Ricans have been taught concerning the dominant narrative of racial democracy and the diminishing of African and Taíno contributions to Puerto Rican identity.” (116) The Young Lords today, is still known for their advocacy in bringing both the LatinX and Black communities together.

In the late 1960’s, the Puerto Rican community in Harlem, New York was going through a very similar deprivation of rights to other people of color. During this time there were protests that were created to fight against oppressive government policies. People in the LatinX and black community were going through similar difficulties such as second-rate housing conditions, lack of employment opportunities, gentrification, and dealing with corrupt law enforcement; however, the Black Panthers focused primarily on the rights of black people. Puerto Rican activists along with youths were influenced into reforming the Young Lords from a street gang to a revolutionary resistance organization because of the Black Panthers influence for change.

The Young Lords were being recognized by people who supported their actions and the ideas of their organization, which was to support their LatinX community, and bring everyone together to fight against the systematic racism and mistreatment by the government and white racist. The Young Lords were eventually recognized by the Chairman of the Black Panther Party of Illinois, Fred Hampton. Hampton then contacted Jimenez, requesting a meeting with the hope of working closer together and mentoring the Young Lords to make them revolutionary. Jefferey O.G Ogbar then states that the “Panthers hoped to make the Young Lords into revolutionaries...impressed with the bold and brash militancy that characterized the Panthers, Jimenez envisioned a Puerto Rican revolutionary” (156). With the communication and mentoring Fred Hampton offered the Young Lords, this was the beginning of the Black Panther party having direct influence on the Young Lords, which lead to them being revolutionary.

After their collaboration with the Black Panther Party, the Young Lords began to contribute to their own community in similar ways by handing out free breakfasts, and having educational programs; something the Panthers were originally recognized for doing themselves. Jefferey O.G Ogbar continues and explains that, “Within weeks the Lord's captured headlines. They organized against police brutality, poor city services, slum housing, poor education, and occupied a methodist church... They sponsored drug detoxification, and garbage clean up programs” (157). The Young Lords, having collaborated with the Black Panther Party, worked to make allies with other Latino gangs to achieve peace within communities.

The Young Lords worked in Harlem, New York to come together to fight against authority that did not give them fair treatment and as recently as 2009, both the Young Lords and the Black Panthers are still continuing to be involved in the Harlem community. A news article in The New York Amsterdam News, written by  Daa'iya L. Sanusi, entitled, "Young Lords and Black Panther Survival Program," announced “Lend your metrocards to panthers and lords... as a demonstration..to show how people survive by supporting one another... by sharing a ride with local activists we can actively show our people… how to survive” (1). Similar to the Panthers, the Young Lords continued  on by conducting police patrols, food giveaways, health care benefits, and educated their group members and other people about their history. The Young Lords having came up with similar ideas to the Black Panthers, the Young Lords were often only heard of when talking about the Black Panther Party.

In 1966, the Black Panther Party came up with a 10-Point program expressing their demands to the government on what they want, and what they want to see for the people of their community. Not shockingly, 3 years later in 1969, the Young Lords created their own 13-Point program for what they want to see for the LatinX community. Each point program targeted different groups, but even though the Black Panthers’ demands were for the black community, and the Young Lords’ for the latino community, they shared similar ideologies behind their demands. For example, Demand number 6 for the Young Lords stated “We want true education of our creole culture, and Spanish language.”(macaulay.cuny.edu) Similar to one of the Black Panthers’ points of wanting education for all of their people about their history, the Young Lords also wanted to teach their people about present events. Both Organizations’ demands asked for better education for their races, with education based on their race.

Another example was Demand number 9 on the Young Lords’ 13-points and number 8 on the Panthers 10-point program. Both of these demands requested the release of political prisoners of their people. The Book, The Young Lords:A Reader, edited by Enck-Wanzer, included The Lords’ 13-point program and it states, “We want freedom for all political prisoners. We want all Puerto Ricans freed because they have been tried by racist courts of the colonizers, and not by their own people and peers. We want all freedom fighters released from jail.” (9) This demand is similar to the Panthers’ point which demanded freedom for all black men held in federal, state, county, and city prisons and jails, and requested that all black people should be released from prisons because of their unfair trial. Much discrimination was going on against the black community and the latin community for not having a fair chance under the court systems in the late 1960’s. Along with these 4 points being similar, there were other similar points such as the removal of black and Latino men from military service. Men from both communities were forced to participate in the Vietnam War under the draft. The ideologies of the Black Panthers’ 10 point program set an outline for the Young Lords’ 13 point program, requesting for similar demands that help serve justice to their communities and speak out against America's corrupt policies against them.

The Young Lords choosing the Black Panthers as a group to model themselves after, helped them in becoming the group they wanted to be by giving back, fighting for equal treatment, and becoming recognized. They didn’t choose to model themselves after immigrants because the Lords didn’t consider themselves as Puerto Rican immigrants. They considered themselves citizens, who regardless of the skin tone they appeared to have, should not be marginalized. The Black Panthers stood up for their people, and to the oppressor, which is the reason why the Young Lords wanted to organize themselves to do the same thing while bringing awareness to the similar backgrounds and ancestry many of them had. There is no doubt that after looking at their point program that they were indeed influenced by the Black Panther Party. Today they are looked at in conversation with Afro Latinidad, a recent term that speaks to LatinX people who identify as black, especially to those of Dominican, Puerto Rican, and Cuban decent. They are seen as icons who fought for unity and the rights of their people, and will continue to be known as a example in history that acknowledges that Black and LatinX communities work remarkably together.

I am a twenty-two year old, Puerto Rican and Dominican woman born and raised in Brooklyn, New York. I am a senior at Marymount Manhattan College (Class of 2020) majoring in both English and digital journalism. I love shrimp tacos and can’t live without Guava juice. I believe it is important to remember who fought for our communities and talk about their long lasting impact, especially since we remain in a time where Black and LatinX communities continue to be attacked, judged, and degraded by white nationalists.