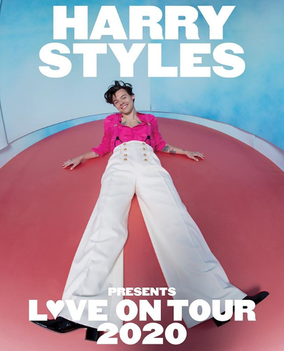 Harry Styles' stylistic choices, from his own Instagram to music videos, have captured the public’s attention and added to the conversation around gendered fashion, especially with masculinity.

Styles is of course not the first celebrity to challenge masculinity and fashion. Singers David Bowie and Prince both preceded him in terms of breaking boundaries. Yet, in the last couple of years the media’s buzz around Styles’ fashion choices has brought more attention to inclusivity in fashion.

One of the reasons I think Harry Styles has gained attention is because of Styles' background as a One Direction band member. His fashion evolution from being part of a hegemonic, masculine ideal of a boy band with swooning female fans, to a solo singer who utilizes gender fluidity in fashion, points to a new trend in fashion and masculinity. According to the project Refashioning Masculinity, ‘‘Since fashion is the most visible tool to validate masculine/feminine binary, we believe it is also the perfect tool to disrupt and transform it.’' (Barry 1).

I decided to analyze three images of Harry Styles and see how aspects of his clothing choice, jewelry, and makeup defy gender norms. The first image is Harry Styles wearing Gucci at the 2019 Met Gala. Another is a close-up of Style’s face with makeup. The last is one of him sitting in a chair with legs crossed topless and in fishnets. These latter two images are side by side from a photoshoot Styles did for Beauty Papers.

The analysis of these three photos shows how Harry Styles’ androgynous style choices further advocates deconstructing gender binaries in fashion. In the image from the 2019 Met Gala where "camp" was the theme, every celebrity had there own take. Camp in fashion was first written about by Susan Sontag in her essay ‘‘Notes on Camp’’ and the concept itself was founded by the Black and LGBTQ community. Camp style is usually extravagant and loud, yet as Refinery29 notes this is all subjective, "What one-person interprets as camp might not translate that way to someone else.’’(Rivas 1).

Styles’ look was more subtle than the other ensembles that night. But I think the details of his outfit is where the camp theme is reminisce. The Gucci jumpsuit itself is a piece that combines binaries of masculine and feminine. The outline of the jumpsuit echoes a masculine, suit influence. The details of the jumpsuit, the lace and sheer material, evokes a feminine quality. The jewelry choice, a single earring, an abundance of rings, and dark nail polish, also defy gender norms. Why is this image of Harry Styles’ important to the conversation surrounding fashion and masculinity?

To reiterate my earlier point, I believe a lot of the attention with Styles’ fashion evolution is because of his past as a heartthrob in a boy band. This progression shows a fluidity with masculinity and fashion. In Re-Fashioning Masculinity: Social Identity and Context in Men’s Hybrid through Dress, Ben Barry writes, ‘Kaiser and Green (2016) argued that men’s clothes not only adorn men’s bodies but also works to simultaneously ‘‘unmark’’ and ‘‘mark’’ them.’’ (Barry 640). Barry continues, ‘‘Clothes re-mark men’s bodies by constantly rearticulating new masculine subjectivities.’’ (Barry 640). Harry Styles uses this concept of re-marking his subjectivity with fashion because by wearing ensembles, like his Met Gala outfit, he is re-constructing his previous image. Since Styles is in the public eye, this re-marking adds to the conversation of gender expression through fashion not being a fixated and binary concept.

The second image is a side by side photoshoot spread from Issue number eight of Beauty Papers for Summer 2020. The image of Harry Styles in fishnet stockings and loafers was so instantly iconic that the eighth issue of Beauty Papers is out of stock, with sales suspended for the moment. I think that both photos side by side are important to study together. Each photo, like the Met Gala image, defies gender binaries through different approaches.  The close-up photo of Harry Styles uses the contrast of visible make-up with a tie and suit jacket. Makeup in mainstream society has typically held the connotation of being associated with women. Whereas, facial hair, ties and suit jackets have the connotation of masculinity. This combination, then, disrupts these binary assumptions.

In The Fashioned Body: Fashion, Dress and Social Theory, Joanna Entwistle writes, ‘‘Fashion has also drawn from gay and lesbian subculture in its exploration of gender and sexual identity. In addition, the paradox of the sexually ambiguous transvestite has reached the attention of the mainstream media and produced a growing awareness of the sexual ambiguity of clothes.’’ (Entwistle 2).  I think this quote is important in order to understand the context of why this image of Styles’ is impactful. The fashion of masculinity and sexuality in the image is reminiscent of what the queer community has been doing for a long time.

Although, as stated before, Harry Styles is definitely not the first to challenge the role of masculinity in fashion, these images add to the conversation of masculinity and sexuality. As the quote states the awareness of clothing as sexually ambiguous is a movement beginning with the queer community and Styles further brings forth more questions on this topic to the mainstream. The most significant aspect of the photo, in terms of fashion, I believe is the fishnet stockings. Styles takes an eroticized, female article of clothing and re-define it for himself.

Overall, through these images Harry Styles is shown to be a relevant part of the deconstruction of masculinity and gender in fashion. It’s integral to give credit to the communities who began this conversation about fashion and gender. Harry Styles fashion choices is in tradition with the gender nonconforming fashion that came before him, while still adding a unique perspective to the discussion. The progression of his fashion style from being part of One Direction to gender fluidity, shows that fashion isn’t a fixated, binary form of self-expression. It leaves society with the question of where mainstream culture stands with fashion and masculinity, especially since so many people were shocked by his style choices.

Mary Durocher is a sophomore at Marymount Manhattan and studies English and World Literatures and Digital Journalism. Her writing interests include feminist, cultural, and literary criticism.  Link to Previous Work: https://marydurocher.wordpress.com/